I Was A Teenage Frankenstein Fake Comic Book Cover! 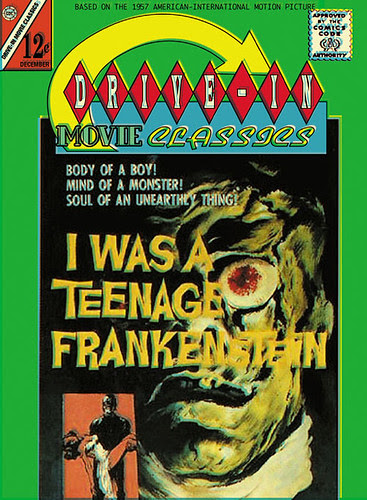 This will require a bit of explaining... a long time ago (it feels now), I used to write a weekly column for World Famous Comics called "Cover Stories," in which I'd usually present five comics covers with a related theme. But once a month, I'd have "Comics They Never Made," in which I faked up comics based on licensed properties that didn't actually exist, and I even came up with some stories for the comics or other stuff.

Anyway, somewhere along the line, I thought, "What if Charlton Comics had produced their own line of movie adaptation comics, like Dell Comics did? What movies would be adapted?" Since they had actually published comics based on Gorgo, Konga, and Reptilicus, I figured they'd go for genre stuff, and so I came up with the title "Drive-In Movie Classics," and started creating the series! This was issue 46 of the fictional series.
Posted by Jon K at 12:01 AM

Labels: Comic Books, I Was a Teenage Frankenstein