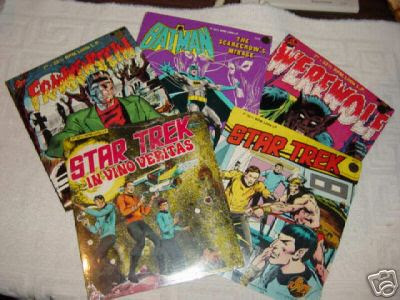 Here's some of the last "Power Records" releases, so far as I can tell! Power Records was a division of Peter Pan Records, and they originally made a splash on the market with comic book sized "book and record" sets that actually used real comic book stories (although often with some dialogue rewritten and badly re-lettered). They'd earlier done a Frankenstein one that used the first issue of Marvel Comics' "Monster of Frankenstein", but I'm not sure if the Frankenstein record here is the same record, sans book, or not! Same goes for the Werewolf one (they'd done a book and record that had the origin story from Marvel's "Werewolf By Night", too).
Posted by Jon K at 12:01 AM